I'm Down With the King 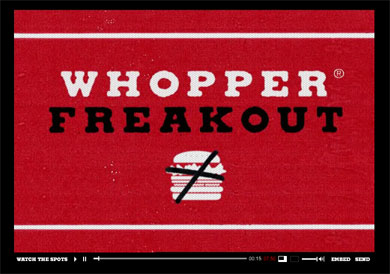 Question: What happens when a national fast food chain removes its signature item (burger, as it was) from the menu?

Better yet, what if you caught those reactions on hidden camera?

That was the premise "Whopper Freakout" campaign for Burger King, architected by Crispin Porter + Bogusky (CP+B). (Click on the graphic to jump to the site, www.whopperfreakout.com)

...and yes, some of them do freak out. Consumers do that from time to time, I'm told.

Random Burger King restaurant removes Whopper from their menu for a day. Customers that tried to order the Whopper were told that the Whopper was no longer available FOREVER. Consumers' reactions were taped.

Other patrons who ordered Whoppers were given burgers from other fast food chains. When they went back to the counter to complain, their reactions were captured. (If they asked to speak to the manager, The King made a cameo.)

The beauty of this campaign was the authenticity of the comments and reactions. We don't know what hit the editing room floor, but the clips that we see show people reminiscing about their histories with the Whopper. As advertising is often criticized for being contrived and unauthentic, these stories were very visceral and real.

Of course, there should ultimately be some business value in all of this, or so I'm told. The campaign was also credited with helping with a double-digit increase in quarterly sales for the Whopper.

As much as I liked the campaign, though, it would have been better if there were a community presence where consumers were asked to share their own stories about their histories with the Whopper, and how they had to walk 10 miles in the snow uphill both ways to go to their favorite Burger King.

Although the campaign was run at the end of '07, CP+B earned a Grand Effie for it a few weeks ago. Congratulations to CP+B; it is a really good campaign.