Spotify is a music streaming service based in Stockholm, Sweden that is currently available in over 55 markets. With over 24 million active users and over 6 million paying subscribers, our customers use Spotify to discover, share, listen, and organize their music.

This growing customer base has also meant a need for various customer support channels since Spotify’s launch in 2008. In February 2012 we launched our Spotify Community with Lithium and now have over  200,000 registered users. Our Community is now top source for customers with queries on everything from their account to device troubleshooting, maintenance, product feedback, and music discussion.

Since the launch of the Community in 2012 up until mid-2013 we also had a core group of around 20 Super Users. These included users that were newly, currently and formerly active across the boards.

Our main focus for the past year was encouraging the growth of our Super Users across the Community so that self-help was promoted across the forums as we continue to look toward Spotify’s future growth. 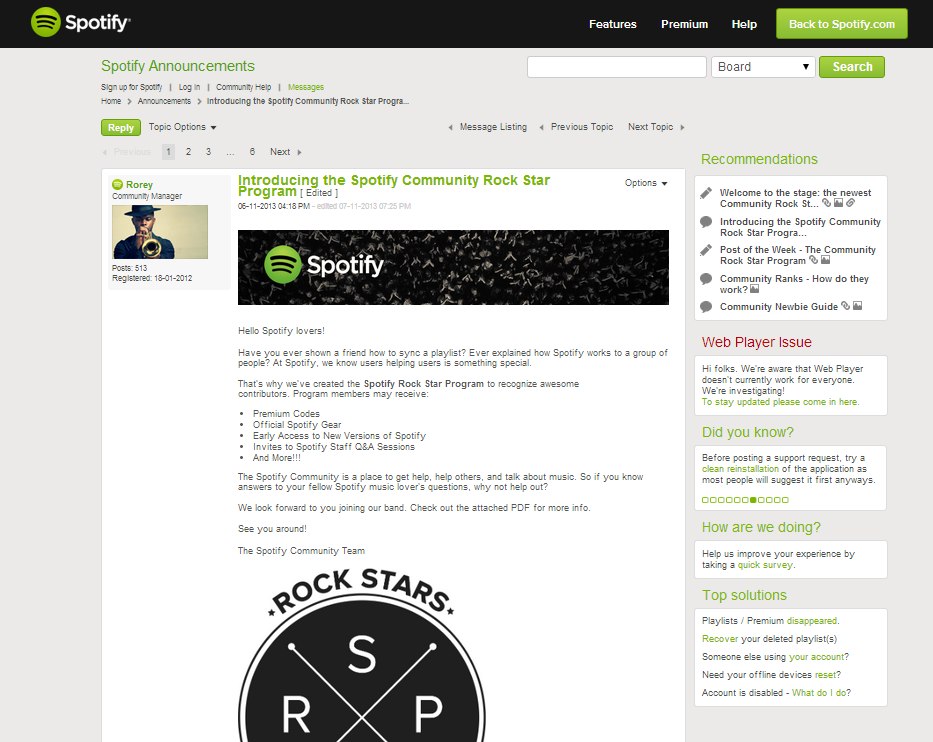 We’ve always taken great effort to reward the Super Users that make their way to the Spotify Community.

Using Lithium’s metrics, we determine the Top 10 Super Users each month and recognize them in our Community Blog. These Top Contributors are rewarded with anything from Spotify merchandise, a month of free Premium, a blog post on our official news site, and branded playlists.

Those Super Users are also invited for other perks including Skype calls with team leaders for Q&A sessions, access to early version of updates, and direct emails to some Spotify.

However, we knew in 2013 that there was still a large untapped group of users that would make great additions to our Spotify’s Super User team. With close to over 200,000 registered users there was clearly room for improvement and retention with interested users.

We also knew that our Lithium Community was the place to find these brand advocates and Super Users that are vital the future of Spotify’s support channels.

In an effort to not only encourage new Super Users to become active, but also to raise awareness of Spotify’s Community and praise the efforts of our current Super Users in 2014, we established the Rock Stars Program in November 2013.

"The Rock Stars Program is really an extension of what we were already doing organically over the years. Since we've made it something more concrete, we've seen a massive increase in the funnel of new Super Users in our community. We're grateful to have so many new fans who are passionate about our brand and helping people." – Rorey Jones, Spotify Global Community Manager

Previously, when Moderators reached out to welcome users that stood out in their accepted solutions, kudos and post count it became clear the benefits of being of a Super User were intangible and difficult to grasp.

Thanks to the Rock Stars Program (RSP), all the benefits of being a Super User are now visible to everyone—not just the Super Users already getting perks.

The first step in the program invites all registered users to simply start posting. They can then rank up 26 different music-themed positions as they start participating in the Community. Our ranks were adjusted to go from “Newbie” and “Casual Listener” up another 26 musical ranks, including “Gig Goer”, “Festival VIP”, “Garage Band”, Radio Producer”, “Singer” and at the top “Senior Producer”.

Users that are gaining kudos, writing accepted solutions, getting to know staff and bringing a great disposition to the forums are then invited to be Rising Stars. For three months these users are given access to a few private boards, meet the staff, and start learning more about Spotify.

At the end of three-month period they can be invited to be Rock Stars—the rank given to top group of Super Users.

Rock Stars are defined as users that are actively helping other customers, gaining kudos, posting accepted solutions, and establishing relationships with Moderators. In the RSP, Rock Stars have a rank structure as well—they can rank from “Label Star” up another 14 ranks to “Musical Legend”. Finally, Rock Stars that slowed in participation and left the community are retired as “Veterans”.

Once a Rock Star, there are different roles users can take as a member of “the band”: The Fun Master, The Protector of Newbs, Community Yoda, The Ideas Guardian, The Blog Maverick.

When we launched the RSP we invited our established Super Users to join as Rock Stars right away. We then invited some new users to join as Rising Stars so they could learn a bit more before gaining all the Rock Star perks.

The public, tiered structure the RSP provides has given users an incentive to start participating, getting to know staff and increasing their overall presence in the forums.

Since the launch of the RSP not only have we seen not only a jump in the User Sessions per month by 4% to 3,869,869 and Searches by Users up 27% to 60,303--but we’ve seen an increase in the post frequency and quality from best top Rock Stars.

With these results just four months after the launch, our team is eager to see what a full year of the program will bring.  Our ever-expanding Spotify user base means the need for knowledgeable, supportive Super Users is become more vital to our Customer Service future and we want the Rock Star Program to be at the center of the Community.

To give you a proper tour of our Rock Star Program, let us introduce the Spotify Community Moderator Greg.  He’ll take you through the register user’s journey through our Community and into the Rock Star Program. See you backstage.

Thanks for the creative promotion of Spotify. Here I recommend the other promotive way to use Spotify, the third-party software TuneFab Spotify Music Converter to download Spotify for offline listening!

Currently, I used the Spotify Music Converter to help me filter the ads for free. And I don't have to subscribe to the Premium service.  I enjoyed this way.