In today's post, well-known blogger and social commentator, John F Moore (@johnfmoore) shares his thoughts on what may happen in 2011.  If you want to look back at John's predictions for last year, they're here!

You may recall that I recently reviewed my 2010 thoughts and predictions, time now to share my thoughts on 2011.

Open Government is a citizen-centric philosophy and strategy that believes the best results are usually driven by partnerships between citizens and government, at all levels.  It is focused entirely on achieving goals through increased efficiency, better management, information transparency, and citizen engagement and most often leverages newer technologies to achieve the desired outcomes. Open Government is bringing business approaches, business technologies, to government.

2010 was the year of open data.  Data sets have been published by the thousands, in countries like the UK, the US, Canada, and Australia.  In the US, the Open Government Directive pushed Federal Agencies to share their data, many states and cities throughout the country have done the same. In fact, San Francisco passed a new law which requires government data be made publicly accessible in developer friendly formats.

What was missing in 2010, however, was the requirement to tie open government efforts to results other than open government.  In other words, US Federal Agencies had goals to share data, not to share data that led to certain outcomes.  As we look forward to 2011 and 2012 there will be more pressure, especially in the US, to tie these initiatives to measurable results.  With a Presidential election only a couple of years away there will be a strong push to create jobs, reduce debt, and find operational efficiencies.  Open Government efforts have demonstrated results in these areas and will need to continue to do so to become more than just an experiment pushed forth as part of this administration.

This push, combined with backlash from Wikileaks, will result in a few open government setbacks in 2011.  However, those efforts that survive 2011 will provide us with a blueprint for success.  These efforts will be tied to measurable results like job creation, operational efficiencies, and ethics reforms (the earmark discussion will continue).

Worldwide sales of Android smart phones were nothing short of amazing in 2010.  These statistics, reported by Gartner, shows Android growing from 3.5% of worldwide smart phone sales to 25.5% in the 12 months between Q3 of 2009 and Q3 of 2010. 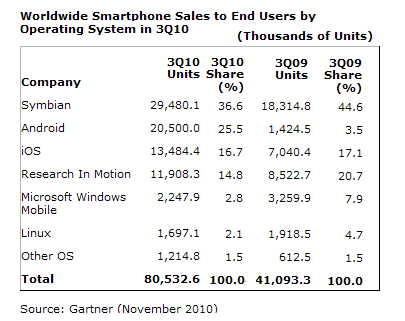 2011 will likely continue to see losses in market share for Symbian, iOS, and Research in Motion as Android and Windows Phone 7 make gains.  Organizations investing in mobile will be best served focusing on mobile web applications before building OS-specific solutions as the marketplace will be more fragmented by the end of 2011, not less.  My guess, and that is what I consider it, is that the worldwide Smartphone sale numbers for Q3 2011 will be something along these lines:

In 2010 many social media monitoring companies were acquired and integrated into existing solutions leading to richer solutions coming from companies such as Lithium, IBM, Salesforce, Jive, and others.  In 2011 we will see more acquisitions of tool-level companies (monitoring, authentication, and reporting solutions) as the leaders in the space will find it cheaper to buy vs. build in many cases.

The current tools generally focus on influencer identification by metrics-based analysis across multiple social networks and the tools recognize that influence fluctuates.  In 2011 we will see a focus on influence at a more granular, topic-level, vs. the current global view of influence, recognizing the fact that a person’s level of influence does fluctuate from topic to topic.  Also, expect to see applications like “Who Gives a Tweet?” that uses crowd sourced community feedback to weigh into influence, balancing automated measurement with manual.

Geosocial will remain a niche solution in 2011, not seeing much gain in user adoption.  Even if Foursquare sees a 500% growth-rate it will not be sufficient to bring it into the mainstream.  However, expect to see some solid results delivered for local government, restaurant and hotels, and entertainment where efforts will be able to be mapped to increased revenue and/or decreased operating costs.