How Can A Twelve Year Old Be Influential Enough to Sell Her Family Home?

Erin Korogodsky is Lithium's social media quarterback.  Obsessed with the social customer experience, Erin has worked with Lithium clients to monitor their brands and brainstorm social strategy, with a focus on enlisting and engaging passionate fans.  She is a frequent blogger on the Lithosphere (as ErinKoro) and you can follow her on twitter at @erinkoro and one of the team on @LithiumTech.

Picture Erin, circa 1989.  I was twelve at the time and, well, suffering from all that is pre-teen tragedy.  I had bad skin, bad crushes and bad eyeliner.  That didn't stop me and my "charming personality" - nothing did.   I was politely asked to "be seen and not heard" by many exasperated Aunts, Uncles and Step-Parents.  It didn't matter - I simply never shut up.  My report cards all had one thing in common:  "Refrains from unnecessary talking"  was always left unchecked.

One day, I was in 7th grade homeroom, catching up on foreign affairs fun weekend activities with my classmate, Matt:

Erin:  What did you do this weekend?

Matt:  My dad wants to buy a house and he dragged me to see a million of them.  It was SO boring.

Erin:  My mom is selling a house.

Matt:  That's where we were looking.

Great, the teacher was going to call my mom again.  I figured I might as well fess up.

Erin:  My teacher might call again - I got in trouble for talking in class today.

Mom:  What was so important that you couldn't stop talking for 5 minutes when the teacher asked you to?

Erin:  My friend Matt was telling me that his dad wants to buy a house in Tahoe Village and I was JUST telling him that you were selling a house when we got into trouble.

My mom called Mr. Friedman that night.  He needed to buy a house cheap.  My mom, having just gotten married to my step-dad, had already bought a new house.  Ours was practically a fire sale and in the right neighborhood.  The Friedman's bought the house and it closed a couple of weeks later.

And that's how a twelve year old was influential enough to sell a house.  True story.

Influence.  Everyone's talking about it.  In fact, that word has been mentioned on the social web over 36,000 times in just the last 24 hours.  I hear "influence" being tossed around a lot - whether its a debate about the validity of Klout vs Kred or finding the people who naturally evangelize your brand, we're all looking to capture and repeat moments of influence, elusive as they may be.

The problem with looking at patterns of influence is that it is typically an exercise in hindsight.  The dynamics of an influential situation are very specific and often hard to repeat.  At Lithium, we've got this down to a science, thanks in large part to the work of Michael Wu, PhD.  At a high level, influence is really a chain of events, between two people that helps us understand why one moment of time is so impacting in another person's decision making.

Michael has written extensively about influence, breaking down each factor in detail.  Michael defines influence in his blog The 6 Factors of Social Media Influence: Influence Analytics 1, so I grabbed the copy and added in the chain of events that added up to me selling our house:

So what are the take-away's here? 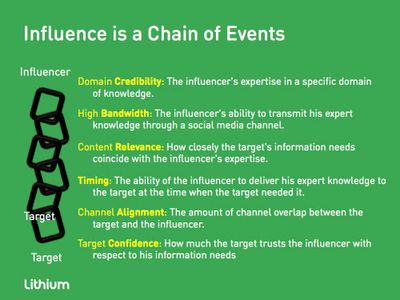 Secondly, you probably can't always repeat every influential situation, every time.  What you can do is understand the chain of events that has to happen, in order for influence to occur during a moment in time.

You do not want to break the chain of influence but rather create places where the dynamic of influence can happen.   Encourage people along the way to engage in something that is already natural.

Third, don't try too hard to be influential.   Rather just "be" influential by giving help or advice first and demonstrating that you've got the expertise and time to help.

For example, I consider Jeremiah Owyang to be a very influential person in social media.  He has definitely influenced me.  When I am in his office at the Altimeter Group (we're a client), you notice this immediately.  When Jeremiah senses he can be helpful to you, he doesn't say, "Why don't you buy some more advisory units and I'll be happy to share my thoughts."  Instead, he adds value by getting up, handing you something useful (like a research report or a book from the Altimeter Library) and gives it to you.  Obviously, that is just one small resource and its implied that if you need more information or help, you know where to get it.

Sure, it would be nice if all influence came down to a score or industry standard - but it just doesn't.  And I couldn't care less that my Klout score is 66  54 (when did my Klout score take a nose dive!!?).   If we manage a brand, we want to know "who are the influencers" or "where are the influencers?" but that can be an ever-changing arms race.  Create an environment where all six factors of influence can occur, mix in some relevant content and voilà, influence happens naturally.

Want to hear more about influence from Michael? Hear it in his own words in this video, compliments of The Social Client: