At Scout Labs, we’re on Twitter every day a few times every day a lot. I’d consider us to be “Twitter savvy.” We’re looking for mentions of @Scoutlabs, Scout Labs, @LithiumTech, our competitors, a few hash tags. I respond. I engage. I re-Tweet. I even wrote a blog post about why people should be on Twitter to begin with.You can’t stop me.

We have “rules of engagement” and policies that keep us from blasting our stream with messages that come across with message that is too “sales oriented” and with the “right tone.” We’ve thought it out, have a lot of eyes watching it and rarely miss a mention that includes something we care about.

I typically use my@erinkoro account for Tweets from me and throw in a @scoutlabs when its work related. Come on, we preach this stuff every day and walk the walk. Or Tweet the Tweet (couldn’t resist).

So today, I had an interaction with @chadarizona on Twitter that made me really think. Here’s the series of Tweets: 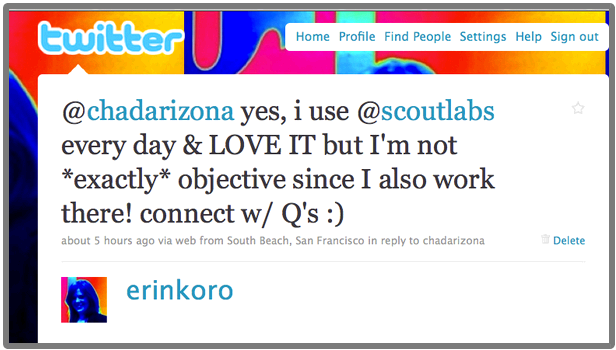 Gulp. I have an elevator pitch down. I know our competitive advantages. I can demo the hell out of Scout Labs.BUT - What is my 140 character description of Scout Labs?? (Actually, less then 140 because I needed room for @chadarizona in the message).

I had a live one. He was in my grips. This is a sales person’s dream. I even managed not to come off too much like a sales person. Sort of. But once I had @chadarizona’s attention, I had to really think about what I wanted to say. I was away from my computer, on my iphone, couldn’t use a bit.ly link to send him to some of our content - I had to just go for it. Here’s what I came up with: 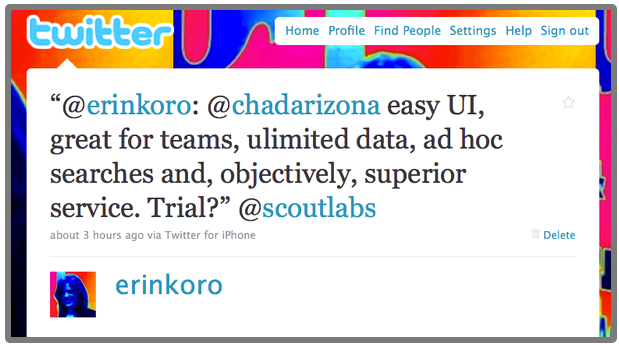 Grrr. There’s a typo. And if I gave it some thought, I’d probably refine this a little bit. But what I got out of it was much more then just the opportunity to work with Chad. I got a little wake up call that if I’m going to use Twitter for lead generation, then I better have my Twitter pitch down.

So that brings me to a question for you - what’s your Twitter pitch? Have at it - you got 140 characters, baby.

You might be wondering, “what happened?!” Well I got about as much as I could hope for - first by having an actual “conversation” with a prospect via Twitter and secondly, @chadarizona’s interest. THANKS@chadarizona, I’m looking forward to working with you! 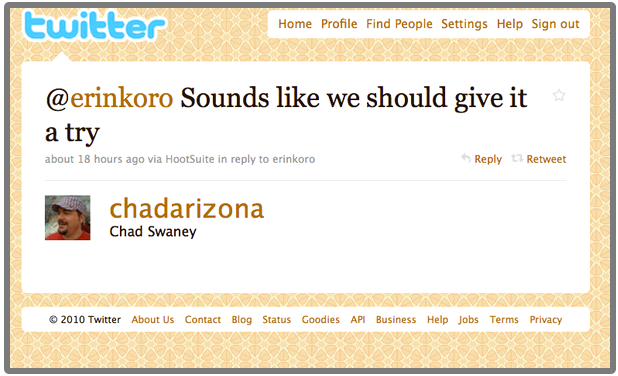 Posted previously on scoutlabs.com/blog on Jun 10, 2010