Sanjay Dholakia is Lithium Technologies’ Chief Marketing Officer. He is a frequent contributor in the Social CRM Matters blog on the Lithosphere.

Momentum often speaks for itself, but when peer and industry groups recognize the work, innovation and dedication of the team, then you know that the effort is well placed. So I am delighted to say that last week the Telecom Council honored us with their 'Edison Award for Most Innovative Startup' - also known as a SPIFFY.   Read our press release

Members of the Telecom Council represent 20 of the world's largest and most prestigious carriers, representing over two billion subscribers such as AT&T, British Telecom, Verizon, Sprint, China Mobile, and Vodafone.  The award was presented by Peter Barry of Vodafone at the Telecom Council's annual event in Palo Alto, California.

The voting membership of the Telecom Council's Service Provider Forum (SPIF) reviewed over 100+ start-ups at local Telecom Council meetings throughout 2009.

The competition for these awards is stiff, with all startups and public companies screened by Telecom Council Steering Committees before they are selected to present to the SPIF or other Telecom Council forum meetings.  Startups who present have been identified as having ideas, relevance, and traction that most appeal to carriers and service providers from around the globe.

Here at Lithium, we were fortunate enough to present to to the Telecom Council in December. The Award recognizes the enormous value that this team is creating for the telecom and wireless industry.  This win continues our strong momentum and market recognition.

We're thrilled to receive these awards - and even more thrilled to see the market taking note of the incredible work and effort of everyone here at Lithium.  Congratulations to the team, thank you to the Telecom Council and thank you to Peter Barry of Vodafone who presented us with the award. 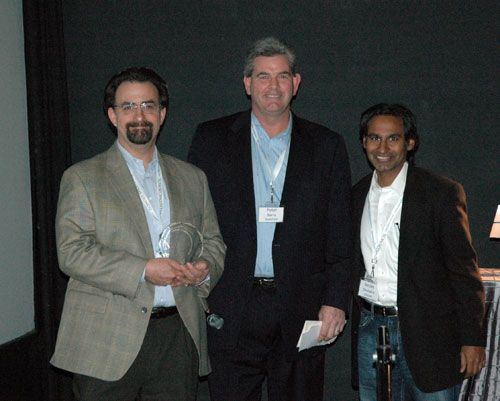 Other Coverage of the SPIFFY Awards