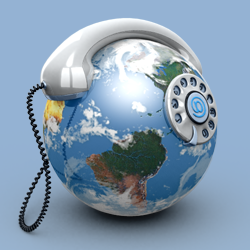 This January, I’ve been working on a super interesting primary research project in the telecom space. In partnership with Telesperience, Lithium is conducting a global study of 40+ telecoms across Europe, North America and Asia looking into the business impact of their social media investments.

I’ve had a peek at the raw data and the early analysis and I’m like I kid at Christmas. But it’s more like I can’t wait until you open your gift—I think you’re really going to like it. But you have to wait! The findings will be released February 14th during a webcast hosted by Mike Betzer, SVP of Lithium Social Web (register here). A full report will be available immediately after the webcast.

Here’s why this particular project has been near and dear to my heart. My first job out of college was as an account exec selling B2B telecom services for MCI in (get this) Santa Clara, CA. My whole territory was like 4 zip codes. And I shared it with a senior AE and a couple of major and national account reps with named accounts. Let me tell you, none of us was hurting. For a kid just out of school, life was grand.

Coincidentally, our upcoming webcast host, Mike Betzer, also was with MCI back in those days. While I was hitting up tech companies in Silicon Valley, Mike was on the consumer side setting up call centers. And call centers. And call centers. It’s been terrific fun to reminisce with him about those days. It was an amazing ride. As Mike commented recently, “It was—and still is—the biggest market shift in history.” The MCI story remains one of the most interesting business stories of all time.

Not many of us may remember that MCI can practically be credited with creating the telecom industry. In 1963, Microwave Communications, Inc. was created to set up a series of microwave relay stations for truckers between Chicago and St. Louis. In 1974 they filed an antitrust law suit against AT&T citing their local operators (the Bell companies) engaged in unfair trade by refusing to do business with MCI.

For 6 long years, MCI trudged forward, even re-locating their headquarters to Washington DC so they could stare down the 9,000 lb gorilla that was American Telephone and Telegraph. In June of 1980, the suit was settled. MCI was awarded $1.8 billion in damages. But way better than all that cash, as we used to love to say, “We broke up Ma Bell”.

A president was set; the market was free to compete. The telecommunications race was on and we were at the head of the pack. May I say, the view was nice!  Innovating all over town with new products—teleconferencing, MCI Fax, MCI Mail (yes, email). I had nothing short of a blast selling for MCI.

Overnight, a competitive industry was born. Innovation spiked sharply northward. Networked communication has only gotten better, faster, and more powerful ever since. It’s almost like the whole Internet was a forgone conclusion the minute that law suit was settled.

But here’s the punch line: If you were to ask any employee from those years what was the secret to MCI’s success, odds are they’d say, “Friends and Family”.  Remember that campaign?  Somewhere around 1988 somebody got the very simple but very clever idea: “Have our customers sign up their friends and family and we’ll give them special rates when they talk to each other” Ka-Boom! MCI customers were signing up other customers right, left, top and bottom. MCI common shares went from $5 to $40 in 22 months.

Industry watchers who remember MCI Friends and Family sometimes mischaracterize it as a loyalty program. It was, but the story so doesn’t stop there. The cool part of the story is this: community-based word-of-mouth marketing can be a total game-changer. I mean, if you’re looking for business metrics to measure the success of a word-of-mouth campaign, you can’t do much better than an 8 fold increase in stock price.

Yes, those were heady days. So you can see why peering into the place where telecom and social meet has been an especially engaging project for me. I can’t help but think about how far we’ve come since MCI’s Friends and Family…or have we?

Are telecoms still pushing the envelope? Are they still using the power of their own customer networks to drive real business change? Join us on February 14th and find out.

Bonnie is a B2B marketing vet with a passion foremerging SaaS technologies. As director of content strategy for Lithium, she drives real business results with customer-centric, data-driven, omni-channel content strategies. You can follow her on Twitter @btsite.