Public
Turn on suggestions
Auto-suggest helps you quickly narrow down your search results by suggesting possible matches as you type.
Showing results for
Show  only  | Search instead for
Did you mean:
This website uses cookies. By clicking OK, you consent to the use of cookies. Click Here to learn more about how we use cookies.
OK

Time flies.. when you're having fun!

Today marks the first anniversary of me joining the Lithium team, though I must admit it does seem like I have been around a lot longer! I think that just comes from having been around the Lithium platform for so long. I first started working with it in mid 2007, and so I have known the team here - particularly Karen, Greg, Joe and Lyle for a long time now.

A lot has happened in and around Lithosphere in those 12 months, in part thanks to all the members who are so active all aspects of the community, but also to the team here, who in between making sure that our customer communities are running smoothly, also have the time to help our own community.

So what are my highlights? Well, in no particular order: 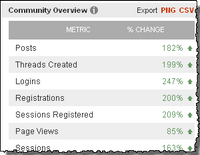 and the list goes on.... CHI up to our highest point ever, 2x registered users from this time last year, more than doubled the amount of content people are consuming, while halving the average response rate, the numbers are great.

What were your highlights for the year, what's the feature you use most? Let me know!

So thank you to everyone who has participated in some way in the Lithosphere for the last year and I look forward to looking back on the next 12 months!

Congrats, Paul! I'm sure the coming 12 months will bring a new wave of exciting additions to the Lithosphere.