If you are a Lithium customer and you have a great story to tell, you're proud of the impact your community is making, or if it has changed the game for your company, let us know about it. The first ever Social CRM Excellence Awards are open. Find out more and enter now!

The National Instruments (NI) Discussion Forums host thousands of discussions with tips, tricks and solutions to the most common problems that engineers all over the world face.

Every online community is created with the hopes of one day reaching people who have a shared passion for a company’s products and services.

For National Instruments, that day happened when Ben Rayner reached 10,000 posts in the NI

Discussion Forums. With this milestone, Ben became the third ever “Knight of NI.” This highly coveted title positioned Ben as a trusted advisor on the discussion forums.

But what the community didn’t know is that before Ben joined the discussion forums he had often struggled with text based programming early in his career due to his dyslexia.

Ben posted, for the entire community to see, that “LabVIEW [the NI flagship software] is a gift from God to the Dyslexic.” “Without it”, Ben continued, “I’d probably be designing optics in a back cube somewhere, counting down the days until I retire. As it stands today, I hope to help the LabVIEW developers of tomorrow when I retire.”

And with that Ben described the entire purpose of the discussion forums, to help build a community of like minded individuals who can share information that helps change people’s lives and impact the future. 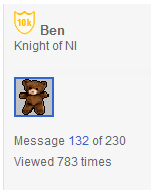 When the first NI Discussion Forum member reached 5,000 posts the community members voted that they should be given the rank of rank “Zealous” in the community.

During this time, the community members continued to bring up the idea that one should be able to become a “Knight of NI,” based on the community's love for the movie Monty Python & the Holy Grail.

The “Knight of NI” title was finally implemented for community members who reached the 10,000 post milestone. “Knights of NI” were to receive a shrubbery from NI for their hard work and dedication.

Along with becoming a Knight of NI, Ben received his shrubbery and even held a knighting ceremony at his own home!

For a regular community member, reaching 10,000 posts is an extraordinary accomplishment, but for Ben Rayner becoming a Knight of NI was something that he, and the rest of the NI community, will never forget.  In fact there are over 230 replies to the congratulatory post for Ben reaching this milestone mark.

That is an awesome story.  Not only a heartfelt one in content, but you just gotta love ritual that takes place in real life that compliments the achievements online.

I hope the knighting ceremony resulted in "only a flesh wound". 🙂