Girl members of the LEGO.com community had been a rare breed. On our old message board platform, we had around a 5% female portion of active users. Since we upgraded the platform, we’ve been enabled to improve our ranking structure and better reward both active and creative participation. Girls have become very active in our story-writing forums, as an example; reading, writing and providing encouragement to others. Since the changes, we’ve seen an increase in activity from girls and they currently make up around 15% of the active community user base.

We have stories about passionate role players who know the finest details of the Lord of the Rings movies and help to keep the forum role plays “canon”/on story. We also have brother and sister pairings who have grown up building LEGO together and write stories, role play and submit creations both separately and together. Possibly one of our best user stories centers on a user who couldn’t be considered anything less than “super”! The user in question is JayZX535.

JayZX535 had been a non-active browser/reader on the old forums, having registered in July of 2012, and was 13 years old at the time. When we migrated our community from our old forums to the new Lithium platform, we were able to create a new ranking structure. We set up participatory ranks whose levels were based on LEGO through the ages, so that you begin at Caveman, move to Pharaoh and upwards and onwards through Gladiator, Samurai Warrior, Ninja and many more.

In addition, we were able to create reader ranks that were based on more passive participation such as reading posts and liking content. The first rank of which is “Apprentice Reader” and the second of which is “Master Reader”.

In December 2012, a month after launching the new forums, we could see we had a solitary Master Reader on the forums and both users and staff began speculating about it. The users asking what criteria were necessary for reaching the rank and the community team wondering why a user might be so highly passively participatory but have never posted a single comment (at the time, JayZX535 spent 4340 minutes online, with 546 likes/kudos given and had read 16551 posts). We were all intrigued.

Shortly after, we had begun a user interview initiative where we would identify positive and pro-active community members and ask them questions to publish their answers in full view of the rest of the community. This provided the users selected with some community celebrity status and also acted well for us to be holding such positive members up as role models.

We decided that we couldn’t resist inviting this intriguing “lurker” to participate in an upcoming interview and so we sent an email to the registered address with the interview questions. We immediately received an automated security response that said:

“To control spam, I now allow incoming messages only from senders I have approved beforehand.

If you would like to be added to my list of approved senders, please fill out the short request form (see link below). Once I approve you, I will receive your original message in my inbox. You do not need to resend your message. I apologize for this one-time inconvenience.

Click the link below to fill out the request:”

With some slight trepidation, we continued to fill in the form and sent in the request, only to receive an error message. We thought that would be the end of our opportunity to have an interview with the enigmatic JayZX535.

The next day, we checked the mail folder for the other interview requests we had sent and found the following interview responses from JayZX535: 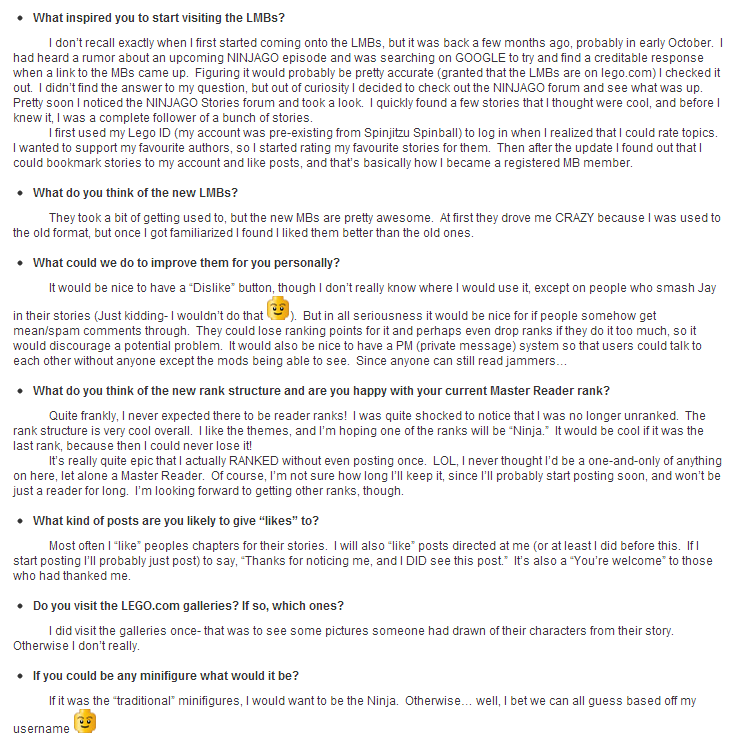 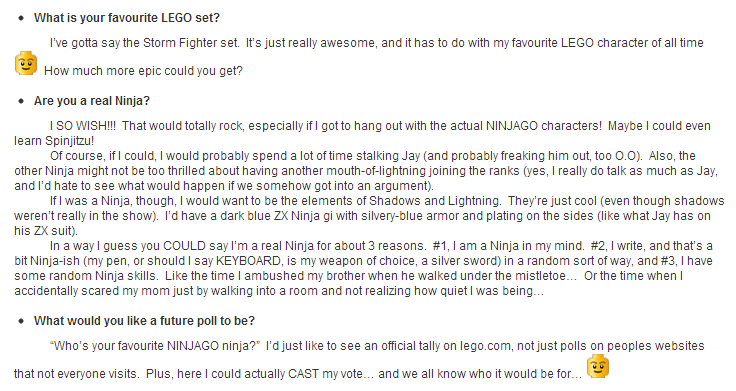 It seems we had lifted the lid on months of pent up desire to be heard and to participate and it was only parental approval that was previously holding the user back. Once the parents had received this request from us and could see we were a safe, creative and friendly community, they had given the green light not just for the interview but for ongoing active participation in the forums. The next revelation was that JayZX535 turned out to be a girl when everyone had assumed she was a boy! She began posting at an exponential rate and, with a lot of the active rank groundwork covered as a Master Reader, began shooting up the ranks faster than any other user we’d seen. Posting stories, roleplaying and generally making friends with all of the users who had wished her well via the interview, JayZX535 is now at Rank 8, a Samurai Warrior, and has submitted 1244 posts! Since the launch of the new platform in November of 2012, JayZX535 has now spent 40,059 minutes online and received 2290 likes/kudos! She has read 68,180 posts and given out 1663 likes/kudos, herself.

She received an overwhelmingly positive reception from the other active users:

You can read some of JayZX535’s Ninja stories here: