TripleHelix (Daniel) is Webroot's biggest fan. He came to Webroot via one of our acquisitions, Prevx, back in 2011. On the old Prevx forum, over the course of about nine years, TripleHelix accumulated over 9,000 posts. When Webroot acquired Prevx, we embraced their core technology and made it our own. Accordingly, TripleHelix embraced us in a big Canadian bear-hug and never let go.

In only the single year the Webroot Community has been around, he’s already got 1,300 posts – putting him at over 10,000 posts just on our official forums. And not only is he the most active member of our forums - he actively travels the internet seeking out other security-related forums at which to talk about Webroot. Wilders, NeoWin, DSLReports - you name it - TripleHelix probably has an account there. 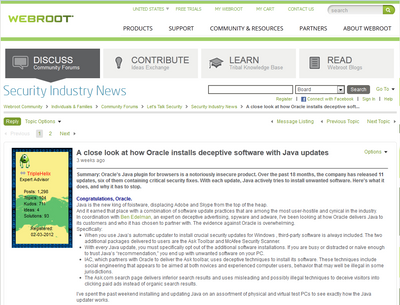 TripleHelix doesn't miss a single day on the forum. Each and every day, like clockwork, he signs in and stays on the forum almost the entire day. When someone replies on his threads, he almost immediately chimes in with a response. He contributes more forum content than anyone else, particularly to our Security News section.

TripleHelix is like a Security News machine who constantly churns out security-related news stories at a pace of a couple of valuable stories per day. He also keeps us up to speed on anything that is coming down the pike from Microsoft, Adobe, Java or any other companies that routinely participate in Patch Tuesday. Patch Tuesday is TripleHelix Tuesday at Webroot.

He isn't just a news-specific contributor though. One of the best things about Daniel is that he will help other users solves their problems. With 93 accepted solutions under his belt (3.5x more than the next closest member), he rivals even our official technical support helpers on the forum in his skill, ability, willingness, and availability to solve problems. It's no wonder he is sometimes mistaken for official Webroot tech support. Other forum members love him too, which is shown by his collection of 700+ kudos. 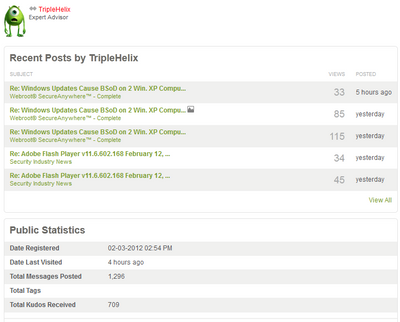 The real icing on the cake with TripleHelix is that he isn't just a Webroot superfan. He's also a Microsoft superfan. What a great combination! One day, Daniel even volunteered to take a bunch of free Webroot trials and branded pens to the next Microsoft convention he attended. We never would have even thought of asking him to do that on our own, but he thought of it himself and will be doing it in April. Daniel is like a magical, traveling Webroot billboard that offers free tech support with a little bit of Santa Claus thrown in for good measure.

Speaking of Santa Claus, one of my favorite TripleHelix stories involves our company Christmas party. On the day we had the party, the entire social media department was going to be off to enjoy some free dinner and beverages. As a rule, we advise it's probably not a good idea to come back to work right after the party. In advance of the party, which was held during otherwise staffed hours, I happened to notice that TripleHelix was online, as usual. I let him know the party was about to start and that the Community would be unstaffed for a couple of hours. He volunteered to hold down the fort while we were off enjoying some holiday cheer. True to his word, during that time, he made a series of useful posts. When I returned after the party was over to check in and make sure there weren't any fires to put out, I saw the posts, and TripleHelix saw that I was online. He sent me the following message:

Flash-forward about a week, TripleHelix was posting on Christmas Day helping users who received the gift of Webroot for Christmas and had immediately installed it. There has never been a more hardcore superfan on the internet than TripleHelix, which is why he deserves this award!