AT&T Inc. (NYSE:T) is a premier communications holding company and one of the most honored companies in the world. Its subsidiaries and affiliates – AT&T operating companies – are the providers of AT&T services in the United States and internationally.

The AT&T Community was founded in 2002 as a place for AT&T wireless customers to engage in online peer-to-peer support. Initially, the community continued to grow with minimal investment from AT&T. However, in 2010, two main factors stagnated community growth:

1.         Fragmented engagement that resulted from additional product lines being added to the community.  (A U-verse community was added in July, 2007, and a DSL/Internet community in August, 2009.)

At the same time, the proliferation of connected consumers led to a drastic increase in customers which expected to get support from and engage directly with brands on digital channels.

From 2002 until 2012, the AT&T Community was home to a group of grassroots community leaders, a combination of citizen and advocate influencers participating in the forum and providing support. The community leaders engaged in discussions and answered questions in their areas of expertise with little interaction with each other. The solutions provided on the forums - a key metric for a support community - stalled with no signs of growth, despite community leader participation.

In 2011, AT&T leadership made the strategic decision to increase investment in the community to help customers get support 24/7 on social channels. We knew an appealing program would drive success by spurring our influencers to engage in more dialogs, create more solutions, and give us feedback. We needed their participation to improve the quality of our content and get valuable feedback on multiple initiatives.

We created an influencer program – the “Award for Community Excellence” (ACE)” - to formally identify and engage both citizen and advocate influencers. In preparation for a late 2012 launch, we engaged experienced outside vendors – including Lithium - to ensure we created a scalable, sustainable program. They analyzed the opportunity, performed a competitive analysis and aligned our team on influencer business objectives.  We concluded that we needed to improve the reach and connectivity of the influencer network, the ability of individuals to influence both content and their own presence, and the degree of enthusiasm towards the AT&T Community.

AT&T delivered the ACE program which identified and nominated outstanding community achievement. Selection methodology has two steps: First, a quantitative analysis determines users who demonstrate top participation in the community based on key metrics, and second, we perform a qualitative analysis to evaluate whether or not those top users embody the influencer attributes we wish to recognize. The quantitative analysis is performed by pulling the metrics for the community members and applying an algorithm that ranks them based on the number of posts they made, solutions they provided and kudos they received. (Kudos are a feature that allows one community member to say “thanks!” to another community member.) We then narrow the list of members under consideration to those who scored above the standard deviation of the dataset. Our community managers then use a qualitative scorecard to grade each member’s performance against key influencer attributes. We use a three-point scale to grade each member on:

•           Exhibiting a neutral to positive degree of enthusiasm towards AT&T

We established a cutoff score from the resulting scorecard to identify potential recipients (nominees) of the Award for Community Excellence (ACE.)

a. “ACE of the Month” recognition in the public community and “with photo” in the private ACE category

On our home and on our category pages: 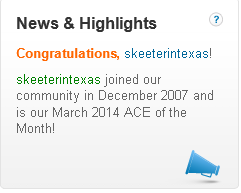 In the private ACE blog: 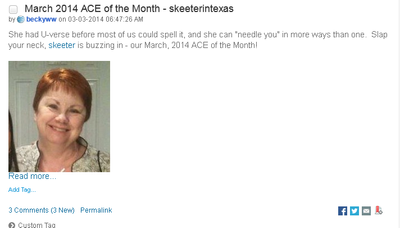 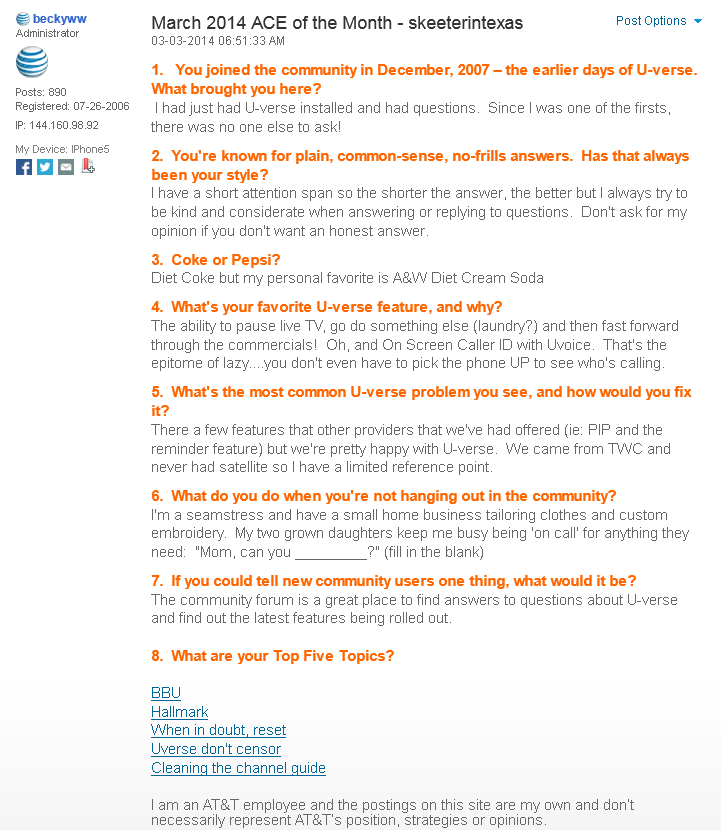 b. Monthly newsletter (in our first-ever use of the blog style)

a. Selection and induction of new ACEs

b. Creation of a video promoting the ACES linked to from our ACE Page 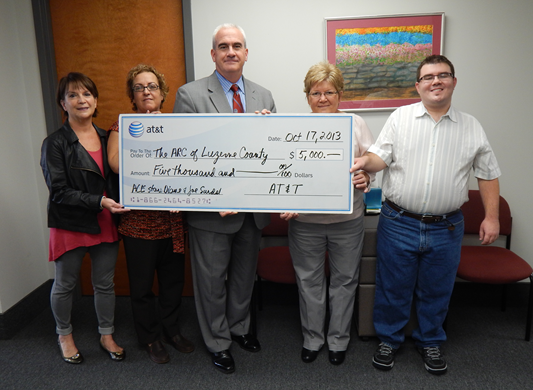 ACE dcookie (second from right) and her son with AT&T External Affairs presenting a $5,000 check to the local 501C3 charity she nominated – The Arc of Luzerne County

d. Offering ACEs the opportunity to attend a quarterly conference with AT&T SME’s to cover topics of mutual interest – including community enhancements

Lithium – as our long-time platform partner – worked with us to create:

a. A rotating carrousel of ACE avatars and stats on our home page

b. A dedicated ACE information page to which every ACE signature links 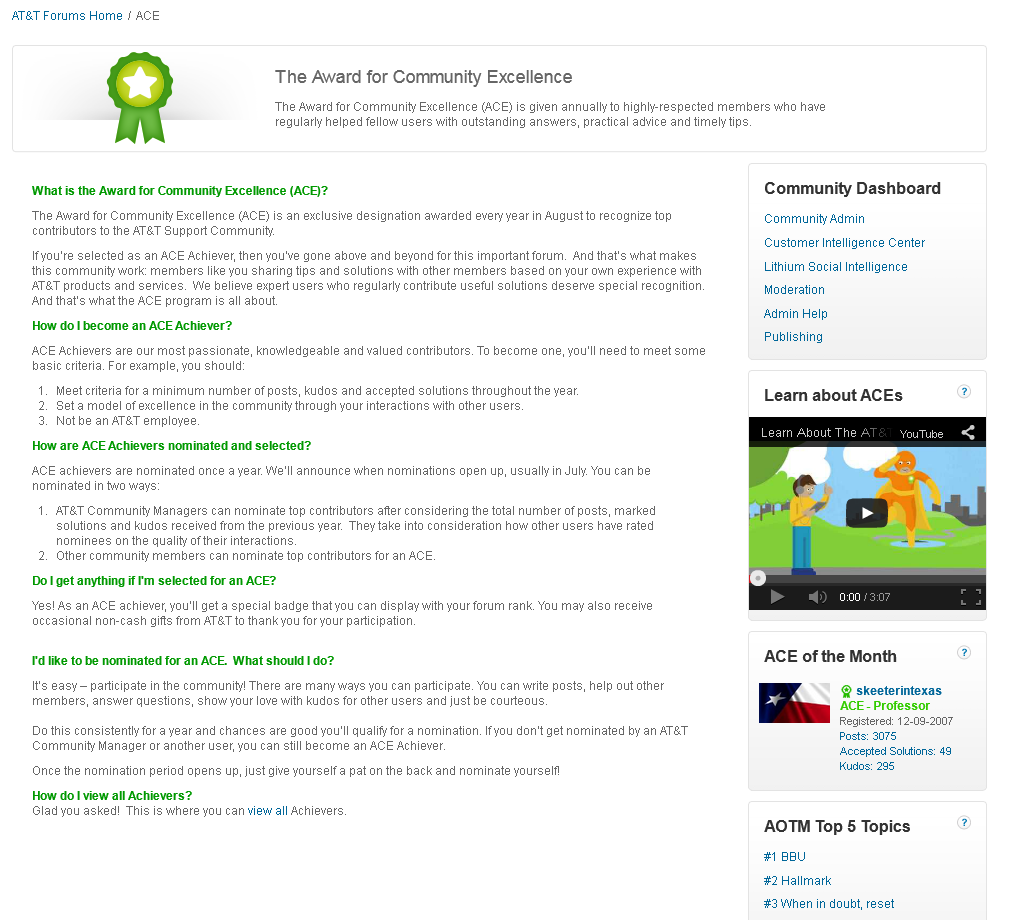 c. A private ACE category in which AT&T and the ACEs can communicate freely and within that private space – our first-ever blog usage 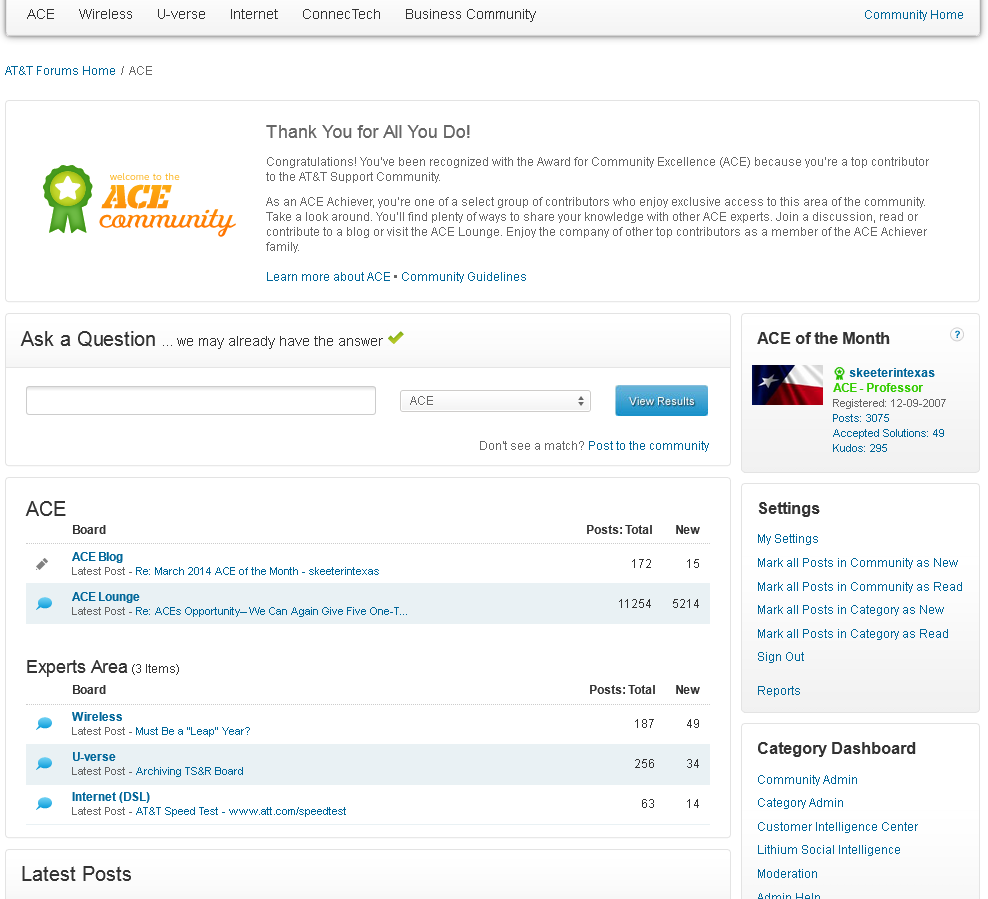 d. Right-rail recognition of “ACE of the Month”

e. A trial of @mentions in the private ACE category

In addition, we consult with our Lithium Success Manager frequently to share ideas and Lithium moderators routinely advise of threads of interest involving ACEs.

One of the greatest outcomes of the program is the change in perception of AT&T and the community that has occurred since the program began. Our survey showed that 30 percent of ACEs said that the program improved their opinion of AT&T.  The kudos use has increased by 36 percent since the program launch. This tells us that our members are more engaged and that they find the AT&T Community to be a helpful and supportive environment.

The last and perhaps greatest outcome of the program has been the increase in customer solutions provided on the community. The monthly average solutions have increased by 58 percent since the launch. This increase provides huge benefit back to AT&T by allowing us to focus on assisting customers with other important service needs, since many questions are answered on the AT&T Community. The solutions are high-quality content that can be reused throughout att.com and found in search results.

The ACE program has greatly benefitted AT&T by building stronger relationships with top influencers, who in turn increase their participation on the community and assist customers with answers to support questions.

The program is popular with the ACEs themselves. The ACEs rated their satisfaction with the program as 8.8 out of 10 on our inaugural survey designed to measure ACE experience and gather feedback. ACE achiever Dcookie expressed her appreciation of the program in the ACE Community in February, writing: “… maybe some of us would have never met or chatted if it hadn’t been for us becoming ACEs. I found that there are really good people here that I’m happy to have met. So I thought I’d say, THANKS, to whoever thought of this idea, it was a good decision…”

We are building strong relationships with the ACEs. Before the launch of the ACE program and its improvements, we did not feel that we could engage the top influencers for feedback because we lacked a connection with them. They were on our community helping our customers, but we had no way to formally and consistently thank them. Now we continually learn about them through the ACE of the month posts, collect their feedback and ideas in conference calls and the private ACE Community, connect with them about support issues and keep up an ongoing conversation. In fact, 90 percent of the ACEs cited the connection with AT&T staff (specifically, our full-time ACE program manager) as being a favorite program component in the survey.

Before the launch of the ACE program, top users did not communicate with each other across product lines (e.g. a Wireless top user never crossed paths with a U-verse® top user). Now the ACEs have great relationships with one another, sharing information and ideas amongst themselves in the private ACE Community. Our survey found that 74 percent of ACEs cited the connection with other ACEs as being another favorite component of the program.  The ACEs regularly congratulate one another for being named ACE of the month or for having one of their solutions highlighted within a support article on att.com.  Recently, a U-verse ACE and a Wireless ACE shared knowledge in the ACE Lounge to solve a product problem. A third ACE chimed in and authored an easily-understood history of telephony that we subsequently published in the larger, public community.  Another ACE has authored his own technical guide.

We are grateful to Lithium for helping build our ACE program.  We’re proud of our ACEs and delighted with the success we’ve seen with the program. We’ve designed the program to be sustainable and enduring and we will continue to recognize and thank exceptional community contributions in the years to come.