Social Graphs: The Art and the Insights

He's a regular blogger on the Lithosphere and previously wrote in the Analytic Science blog.

After our spectacular LiNC2010 conference last week we can now resume our discussion of social networks. Last time when I was blogging about this topic I discussed how to find influencers in a community. I described step-by-step how we build the social graph for the conversation network, what data we used, and how we filter the data to ensure content and temporal relevance. Finally, we looked at some real social graph data from Lithosphere using various node metrics that we’ve computed via social network analysis (SNA). Today, I will show you a few more social graphs from different communities to get a sense of the diversity of social graphs out there.

Since I started analyzing social graphs at Lithium, I’ve examine at least 15,000 social graphs across Lithium’s 200 or so clients (over 250 communities) spanning 10 years of history. One thing that I found is that social graphs, no matter how you construct them, are unique; no two communities are even remotely similar. Picking out just a few typical examples to show in a blog is not easy (I can probably write a book just on the different characteristics of social graphs I’ve seen!).

Note: The social graphs in this blog were built using the same procedure that I outlined in my previous blog “Community Influencers Step by Step.” The only differences are:

Two types of interaction dynamics can be easily identified in a conversation social graph:

The Q&A dynamic starts with someone asking a question, then someone (quite probably an expert) answering them. The conversation may go back and forth several rounds before the expert fully answers the question, but the conversation is primarily between two people. Occasionally, other novices may join the conversation or experts may provide an alternative answer, so conversations between more than two people do occur, but infrequently. The experts may also discuss more technical topics among themselves. 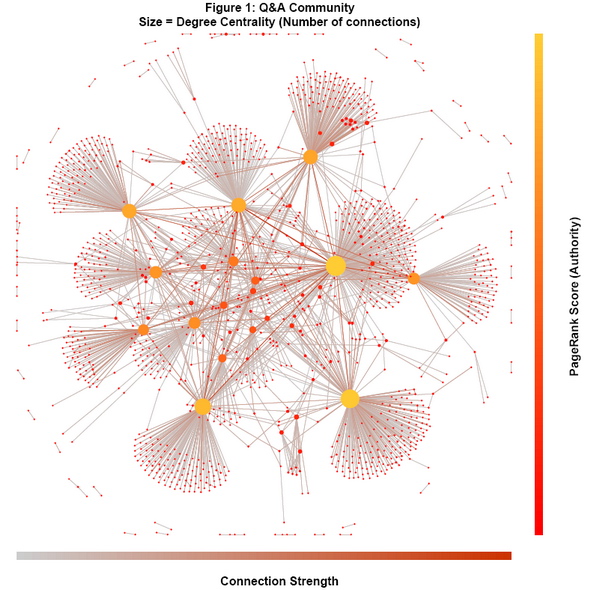 This is exactly what we see in Figure 1, which shows the conversation graph of a Q&A community. This graph shows 1366 users co-participated in conversations over a period of 60 days. The experts are those big yellowish dots (denoting high authority) who answer questions from many different novices (the small red dots). The small red dots usually don’t talk to each other, because their questions are usually quite specific, so there are little connections between them. This produces numerous fan-liked structures around the experts. You can find strong connections (brown edges) between several experts who talk to each other frequently. And you can also find several instances where two big yellow dots talk to a small red dot. 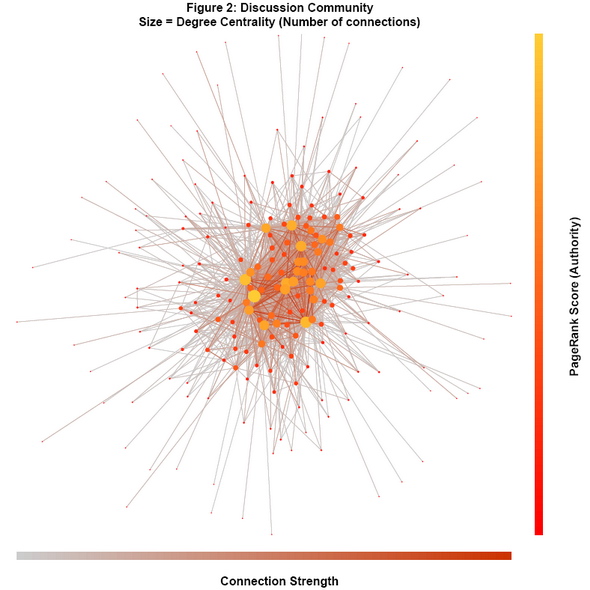 The discussion dynamic is very different. A user starts a topic; then many users join in the conversation to voice their opinions. So the conversation graph for a discussion community looks like Figure 2, in which many users co-participated in conversation with each other. This phenomenon shows up as many triangularly linked edges which connect all the users who co-participated in the same topic. I have built this social graph using data from a 15-day period because the edges in a discussion community can be very dense (In fact we compute the edge density for all our communities, and that is how I identify these discussion communities). This graph only has 212 users, but you can clearly see a very dense core of strong connections where each user connects to many others.

Typical communities will have both Q&A as well as discussion dynamics. There is nothing that prevents a discussion in a support community. Likewise, asking a technical question in a marketing community is not a forbidden activity either. In fact in any given community, there will be a mix of product experts who answer technical questions and discussion leaders who start great conversations (see my video chat with John F Moore, CTO of Swimfish). 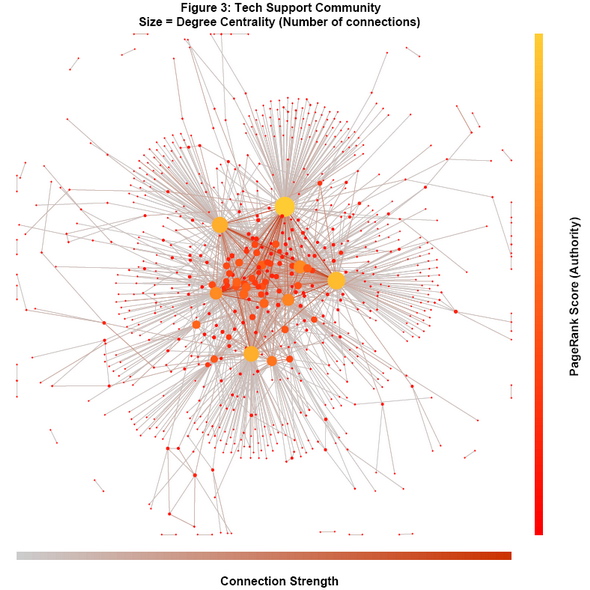 For example, Figure 3 shows a typical conversation social graph of a tech support community. This graph has been built with data over a 60-day period and consists of 750 users. You can clearly see the fan-liked structures around the experts as in a Q&A community. You can even see the experts talking to each other. However, there is also a dense core of heavily connected users that mimics a discussion community at the center. 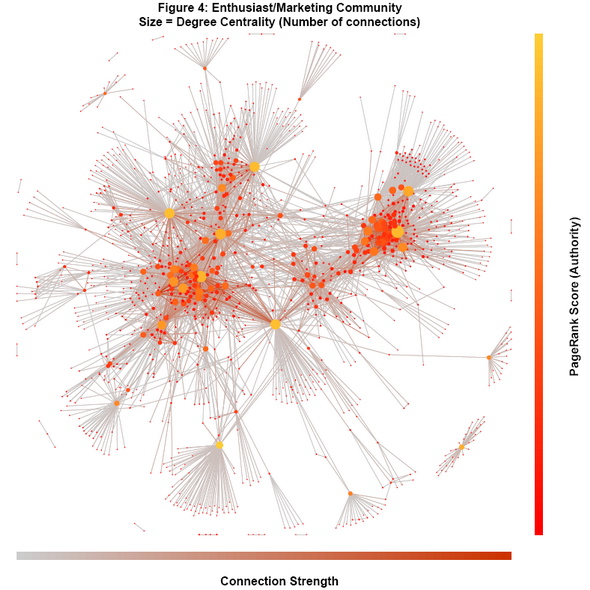 Figure 4 shows a typical conversation social graph of a marketing community. It is built with data from a 60-day window and has 1261 users. Here you can see several clusters of densely connected users. It almost seems like there are three of four sub-communities in this large marketing community. But again, you can definitely see the fan-liked structures around the experts (those high authority yellowish dots) that are scattered throughout the community. There are even two isolated experts, who only talk to the small red dots (one on the upper left and the other on the lower right).

Alright, I hope this blog entry gave you some interesting perspective when looking at social graphs. Was it insightful? I certainly hope so. But where is the art? Well, you’ve been looking at them! Don’t you think these social graphs are beautiful? Even though I’ve already seen at least 15,000 social graphs, the patterns within them are so beautiful that I just never get tired of looking at them. Moreover, since I wrote my own SNA software plus the visualization routines, I can watch the social graph in sequence like a movie. And their growth pattern and temporal evolution are just captivating.

Next time, I will show you two more social graphs and the insights we can obtain via the unconventional graph metrics that we compute. In the meantime, I welcome any kudos, comments, questions, critiques, complaints, etc.  🙂

Labels
Tags (8)
5 Kudos
Share
About the Author
Dr. Michael Wu was the Chief Scientist at Lithium Technologies from 2008 until 2018, where he applied data-driven methodologies to investigate and understand the social web. Michael developed many predictive social analytics with actionable insights. His R&D work won him the recognition as a 2010 Influential Leader by CRM Magazine. His insights are made accessible through “The Science of Social,” and “The Science of Social 2”—two easy-reading e-books for business audience. Prior to industry, Michael received his Ph.D. from UC Berkeley’s Biophysics program, where he also received his triple major undergraduate degree in Applied Math, Physics, and Molecular & Cell Biology.
11 Comments
Dianne Fishel
Not applicable

Very interesting article.  I'm not familiar with SNA but I can see how your analysis could be quite powerful.  Kudos on developing this software.

Thank you for the comment. No worry, not many people know SNA, but I think that as social media becomes an integral part of our lives, people will gain familiarity with them. It is the natural way to analyze social data and understand our personal social network.

Thanks Michael, very interesting. It might be interesting to see the evolution of a social graph captured in some form of animation, in that people new to SNA might get some further insight from seeing that happening in front of their eyes.

This is a great post -- thank you for sharing.

Thank for the suggestion. I will explore and see if I can capture the images and make some sort of movie/animation out of the frames.

Let me take a quick poll here. Is this something that people would like to see? You can click on the kudo (that star button, next to the number just below and to the right of this message). If there are enough desire, I will get on it faster.  🙂

Great article, Michael. Stuart beat me to the punch, would love to see a movie of the graph being built.

Another thing I think would be cool is another layer of "decoration" on top of these graphs. So the fan-like structure that indicates an expert could be replaced be some expert icon. Individual lines from expert to novice in the fan could be replaced by some sort of answered question icon. Similarly for discussions. Basically one more layer of "visualizing" results, so even people with no knowledge of SNA could understand the conversation dynamics.

I will see what I can do to in terms of capturing the animation. That should be a fun exercise.

And thanks for the suggestion. We definitely have the logic and data for distinguishing an experts from the discussion leaders (as well as other roles in the community). I think we can definitely put some expert icon in place of the big yellow dot. I don't think it will be difficult either. However, I think that putting icon for the edges or other user would probably make the graph too clutter and too hard to read. But I will experiment with it.

Thanks and see you next time.

nice post, and looking forward to your book (a novel?) 😉

The animation would be nice to see, and what I was thinking was that it would be great if something could be developed that shows social graphs in real-time. So one can see it develop as it happens.

Another cool tool would be a social graph browser, to zoom flip, drag etc.

Thanks for the commnet. I wish I have time to write a book. Maybe some days when I am not so busy with all the data analysis and social algorithm development.

Yeah, as you can see there are already few people asking for the animation. I've written a simple tool that allows me to view the time evolution of the social graph. It supports some basic manipulation of the graph, such as zooming, panning, but not dragging the nodes and re-layout them, and they are not real-time. In my info graphic experience, real-time visualization is generally not very useful. it is more valuable to give people the ability to look at the data (in this case the social graph) at ANY point in time. Wouldn't you agree? I mean if there is only 2 choices between real-time (always showing the current graph) vs. non-real-time, but the ability to look back at any point in time in the past.

Building this graph visualization tool into our application will still  require a lot more integration. I don't know when I will get to it, but I will put it into our backlog, and hopefully I can get to day oneday.

Glad you enjoyed the post. See you around next time at Lithosphere.

WOW! So interesting to see how the new data of social networking is being analyzed.  It sounds like each graph is like a snowflake in it's individuality... and just as awe inspiring.  Thank you for taking the time to share... and the video sequence would rock!

It's so nice to hear that you find these data interesting. Majority of the people I talked to don't even care about the data. They just want the final result and the punch line. I'm so glad that there are someone who appreciate the data and the analysis.

You are absolutely right. Social graphs are extremely unique. Although there are some common motifs the are signatures of certain interaction, no two social graphs are ever exactly alike (either at the personal level or the community level). I like your snowflake analogy. It is perfect! I should use it next time when I explain these topic at talks and conferences.

Severa people have already ask for the video. I will see what I can do to capture them.