Welcome back from the Memorial Day long weekend! In my last post, I promised that I’d cover some new topics this time, so I am going to share with you a research project that I’ve been conducting recently on the relationship between social networks and communities.

Since 2008, “social media” has become a heavily-used buzz word in the corporate world. The question is “what is social media?” Many seem to equate social media to Facebook-liked social networking sites; others seem to think that they are blogs, the Twitter family of applications for micro-blogging, Flickr, YouTube, or similar type of content sharing Web 2.0 applications. Yet, answers to this question may still range from social collaboration sites (like Wikipedia, Delicious, or Digg) to online communities (like those we host for our enterprise clients or Yahoo! Answer).

Human social networks and communities actually pre-date their online counterpart for millennia. Both are very well-established and robust social structures that have survived the test of time. And they have emerged and reemerged as civilizations collapse and rise. Humans are naturally predisposed to gravitate to and desire this type of interaction.

For this initial post of the mini blog series, I hope to offer you a perspective that lets you see some basic differentiating features between these two types of social media. Later on, I will show you what we can learn about them from studies in social anthropology. 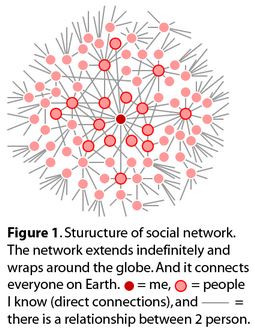 So the single most important feature that distinguishes a social network from a community is how people are held together on these sites. In a social network, people are held together by pre-established interpersonal relationships, such as kinship, friendship, classmates, colleagues, business partners, etc. The connections are built one at a time (i.e. you connect directly with another user). The primary reason that people join a social networking site is to maintain old relationships and establish new ones to expand their network. With this knowledge, it should be obvious why Facebook, MySpace, and LinkedIn are social networks as opposed to communities.

One interesting feature about people’s social networks is that they are extremely unique. It is actually very difficult to fake a Facebook or LinkedIn profile, because your friends (or who you connect to) will collectively identify you. Moreover, because people generally do not compartmentalize their life (unless you are a secret agent for the CIA or some cryptic government agencies), people typically have only one social network. Even for the CIA agents, it could be argued that they have only one social network; it’s just that their network has two or more components that have little overlap. 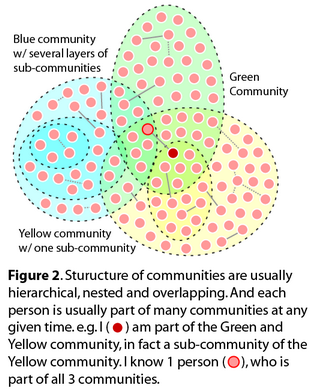 Unlike social networks, communities (both online and offline) are more interesting from a social anthropological perspective, because they often consist of people from all walks of life that seem to have no relationship at all. Yet, as we’ve learned from history, communities are very robust social structures. So what is it that holds these communities together?

Now, do you see why Yelp, Wikipedia, YouTube, Flickr, Digg, the blogosphere, etc., are just communities? Yelp is a community of, originally, food enthusiasts; where as members of the Wikipedia community are passionate about cause of the internet encyclopedia project. YouTube and Flickr are nested communities of video and photography enthusiasts respectively, and they may belong to other sub-communities within the YouTube and/or Flickr community. These sub-communities may simply be your friends and relatives, or people are interested in high dynamics range photography (with 61,000 members) or time lapse videos.

Now that you know the basic difference between social networks and communities from a relational perspective, next time we can discuss more interesting questions, such as the dynamics of tie formation, or what it means to businesses. I haven’t yet decided what I will write, so let me know if there are any interesting topics that you want me to dig into. In the mean time, comments, questions and critiques are all welcomed.

From Weak Ties to Strong Ties: Community vs. Social Networks 3

How Do People Become Connected? Community vs. Social Networks 2