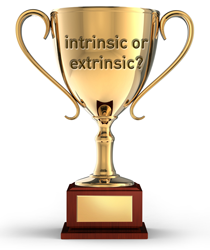 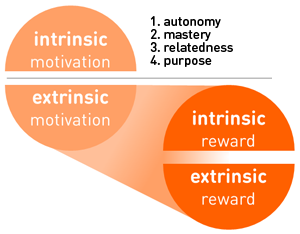 This is very insightful! Thank you!

Hope you like the rest of the articles in this gamification series.

See you again next time.

I deeply enjoyed the clarity expressed in this blog series. Indeed, I've been trying to explain these concepts to my co-teachers in a Denver high school.

So, I have to questions for even greater clarity:

1. Does pushing ever more extrinsic motivation, or rewards, tend to reduce the person's intrinsic motivation to do the task? Does the person move their internal locos of joy to an external locus which is by definition less satisfying? I'm not sure I believe that the relationship is a 'given', and yet I know of various examples that could be explained this way.

2. Are there way in which to 'boost' intrinsic motivation? I presume the answer is yes, and yet, also presume it to be know. My rationale:

A. If we work to create an activity which meets our needs (as teachers), and also entails autonomy (choice of what to learn and how to learn it), mastery, (shows measurable progress [this is measured extrinsically], is performed by others in the classroom, (relatedness), and can be shown to lead to some other deeper meaning [recognizably extrinsic], can we shift the locus of motivation from outside the student to within?

B. People desire recognition (work behavior premise), yet recognition is by definition extrinsic. Is there a risk of recognizing intrinsically motivated behaviors leading to reduction in the behavior? [As such, relatedness, mastery, and purpose listed above are inextricably tied to things outside the body]

Thanks in advance for more engaging reading. I love your concepts and explanations.

Glad you like it @Makc37. Thx for letting me know.

First, my apology for responding so late. The notification email for this comment got stuck in my clutter folder and I just recover it.

Thank you for your questions. Let me give it a stab to see if I can clarify it more.

That said, it doesn't mean this effect will apply to everyone in every case. Some people's intrinsic motivation may be so strong that they simple don't pay attention to the extrinsic rewards. Which is the case for some admirable academicians, artist, musicians, etc. who refuse to be bought. Some may call them stupid, but they simply have more conviction about what they do.

A. You can shift people's locus of motivation from outside to within, but keep in mind that simply shift their focus from extrinsic reward to intrinsic rewards, with are both still extrinsic motivation. The trick is that the students have to really learn it (have a epiphany or some realization like an aha moment).

But it's really difficult to tell if student really learned something. They can just remember it all, but haven't actually learn anything. They may do what you want them to do and even act like they enjoy doing it, but not really learn to love it just for the sake of doing it.

Bottom line is you can but it's not easy.

Remember, intrinsic motivation means the reason you do something is inherent part of the behavior that you are doing; that means what drive to do something is actually just that you are doing, and nothing else (please read my previous blog for a deeper discussion). So I would just recognize lightly but seriously, and emphasize that is the exemplary behavior (that is if you are really sure he's intrinsically motivated, which you cannot really prove).

Ok, I hope I've clarify any confusion you may have. But if anything is still unclear, please let me know. I'm happy to discuss further here.

Nice Article. Thanks For sharing

I honestly can't believe it's been 2.5 years since I first found this blog. Seems like yesterday.

I have reviewed it a few times in those years, and followed up by re-examining Alfie Kohn's books, (and references there-in).

Kohn's work is focused entirely on questioning extrinsic motivational techniques in school, and as parents. His view is generally extrinsic=bad, and his view is supported by mountains of research evidence.

One of his favorite examples is the Pizza Hut Book It! program.  The book it program encourages children to read books in exchange for which they receive a slice of pizza.

The evidence shows that 'some' children who begin the program reading books above their grade level, out of personal interest, will shift their focus onto lower level, shorter books, and when the program ends, may never return to reading at all.

The supposition is not that ALL children will experience this, but that some may, and that we cannot predict which ones.

The further concern is that the children experience a shift away from reading for joy,  (intrinsic), to reading for Pizza, (extrinsic), and when the pizza stops, the reading stops.

This is very simply compared to dog training, at my house, where mom's 'no' is ignored, but dad's 'no' elicits a stop to a behavior.

In the venue of dogs, we experimented by giving the dogs treats every time they went in their kennels. It was a matter of two weeks before they refused to go toward the kennel unless they saw a treat being readied.