Now that SxSW interactive is over, it’s time to get back and do some serious business. For me, that means I’ll return to the world of big data. But let me tell you a little secret: although I work with big data all the time, I never actually look at any big data, because big data isn’t made for human consumption.

No one can make any sense out of direct examination of petabytes of data; not even analysts or data scientists. You can’t even plot them on the monitor, because even the highest resolution monitors are nowhere near a petapixel. We may look at several small samples of the big data during exploratory data analysis (EDA), but that’s not big data per se, since that is just a tiny fraction of big data. Frankly, I don’t know anyone who actually looks through the entire set of big data with their naked eye. Instead, we apply many sophisticated analytics to big data, and let our computers crunch it down to consumable digests. Then we look at the result of these analyses, and that’s where we spend most of our time.

From Exploratory Play to Statistical Rigor 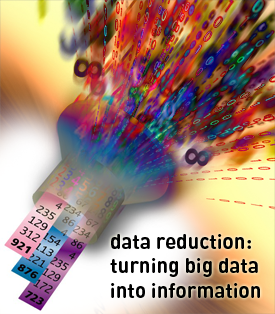 In my previous big data post, we discussed the first step when analyzing any complex data set, that is EDA. This is one of the most important steps in data analysis. However, it is often not given the attention it deserves, because the result of EDA is rarely the end result that businesses want. Rather than helping business answer a question, EDA often creates more questions for the analysts. Moreover, EDA is very challenging, because successful EDA requires both a deep knowledge in statistics and creative imagination. Hence, most data scientists don’t spend enough time doing EDA. However with the rare combination of knowledge and imagination, the result of EDA can be very valuable. It will guide subsequent analyses in a way that will most likely lead to the discovery of new insights.

Suppose you’ve done your homework as a good data scientist and played with the data sufficiently to get a sense of what might be interesting in the data set. What can you do next?

In an attempt to write shorter and more digestible posts, we will only discuss the first class of data reduction techniques today—descriptive analytics. And we will cover predictive and prescriptive analytics in subsequent posts.

I came from a pure academic background and joined the industry about four and half years ago. What surprised me most coming to the industry is what people called analytics and business intelligence. My naïve thinking was that it must be some really complex artificial intelligence (AI) and really advance machine learning models. But after much investigation, I was very surprised to find that most of it is just simple descriptive statistics.

Over 80% of the business analytics, especially social analytics are descriptive analytics. They compute descriptive statistics (i.e. counts, sums, averages, percentages, min, max and simple arithmetic: + − × ÷) that summarizes certain groupings or filtered version of the data, which are typically simple counts of some events. They are mostly based on standard aggregate functions in databases that require nothing more than grade school math. Even basic statistics (e.g. standard deviations, variance, p-value, etc.) are pretty rare.

The purpose of descriptive analytics is simply to summarize and tell you what happened. For example, number of post, mentions, fans, followers, page views, kudos, +1s, check-ins, pins, etc. There are literally thousands of these metrics – it’s pointless to list them – but they are all just simple event counters. Other descriptive analytics may be results of simple arithmetic operations, such as share of voice, average response time, % index, average number of replies per post, etc.

Most of what the industry called advance analytics is nothing more than applying some filters on the data before computing the descriptive statistics. For example, by applying a geo-filter first, you can get metrics like average post per week from UK vs. average post per week from Japan. And you can show these data on a map for all countries. Then all of a sudden you get advanced analytics. But as you can see, the analytics beneath that map is really just grade school math.

So the next time you need to deal with analytics, don’t be afraid! Most of it is just counting, plus filtering, and simple arithmetics. Next time we’ll move into predictive analytics. That's going to be more mathematically challenging, but that is where the fun begins, because you get to predict the future.

Labels
Tags (6)
9 Kudos
About the Author
Dr. Michael Wu was the Chief Scientist at Lithium Technologies from 2008 until 2018, where he applied data-driven methodologies to investigate and understand the social web. Michael developed many predictive social analytics with actionable insights. His R&D work won him the recognition as a 2010 Influential Leader by CRM Magazine. His insights are made accessible through “The Science of Social,” and “The Science of Social 2”—two easy-reading e-books for business audience. Prior to industry, Michael received his Ph.D. from UC Berkeley’s Biophysics program, where he also received his triple major undergraduate degree in Applied Math, Physics, and Molecular & Cell Biology.
5 Comments
Walter Adamson
Not applicable

Good insight into business BI, I hadn't thought of it in such a nice "package" of simply "descriptive" before as I'd just accepted that little of it was to do with statistics and most of it was EDA. Thanks

If this post reveal some perspective that you haven't thought of, then it served it's purpose. Hopefully the next 2 posts on predictive and prescriptive analytics would also be of a revelation to you.

Thx again and see you next time.

I am new to analytics and had a perception like it would be difficult and too much statistics would be involved. My reaction is same as your experience. However, I would say Descriptive Analysis is required as it is a recipe for advanced analytics.