From Weak Ties to Strong Ties: Community vs. Social Networks 3

Last time I talked about the first stage in any relationship: The formation of a weak tie or, how people become connected. It turns out that weak ties can form pretty much anywhere (in communities and through social networks). If you don’t know the factors that govern the formation of weak ties, or don’t know the difference between a community and a social network, I recommend you reading the following posts in this miniseries before diving into this one.

The Value of Strong Ties vs. Weak Ties

Creating a weak tie is the first and the easiest step in any relationship. Other than kinship, nearly all other social relationships start as weak ties. One can argue that even kinships start out weak, and it is only through the frequent family gatherings and interactions that kinships develop into strong relationships. The only difference is that we can’t choose the connections in our kinship. But, we can still choose to what extend we develop these kinships (i.e. whether we want to maintain them as strong ties, or just leave them as weak ties).

Since it is the strong ties that are most valuable, the important question is how does a weak tie grow into a strong tie? For the record, I want to state that I am not saying weak ties are not valuable. They definitely do have value. However, the value of weak ties does not lie within the ties themselves, but in their sheer number and diversity.

A good example is when you are looking for a job. Your close friends (strong relationships) will probably go through great length and spend a lot of time to help you. But since you only have few close friends, they might not be able to get you a job because none of them can find a job opening matching your skill set. In contrary, your acquaintances (weak ties) probably will only spend few minutes to forward your resume to their HR. But you can have many more acquaintances then close friends. Since one success is all you need, by having many weak ties, the odds that one of them would finds something suitable can be quite high. Essentially, having a large number of weak ties enables us to crowdsource our weak ties for help.

The value of strong ties is in the relationship. And their value is far greater than any number of weak ties that you can put together. Just ask yourself, are you willing to trade any of your close friends with 10 acquaintances you met online? How about 100 or 1000? I wouldn’t; definitely not! Strong relationships take a long time to build and they are irreplaceable. I don’t think I need to give you any examples on this. 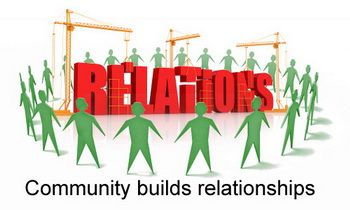 Although weak ties can form in both communities and social networks, tie strength are built up predominantly in communities. Certainly, most of my close friends (strong relationships) are people who share some common communities with me at some point in my life. These communities may be neighborhoods where I grew up, schools that I attended, research labs where I’ve worked, or special interest groups, such as photography club and badminton club. Although I often meet new friends of friends (through my personal social network), without a community to develop these shallow relationships, our “friendship” would remain purely as acquaintance.

Take a look at some of the most successful social network services (SNS), such as Facebook (FB) and LinkedIn. They were created around a natural community where shallow relationships between their members can grow and strengthen over time. For FB, these communities are initially colleges and universities, and later spread into the corporate world. For LinkedIn, these natural communities are companies, professional societies, and industry associations.

This is also true in online communities. I’ve certainly gotten to know a few people quite well on Lithosphere (Lithium’s online community about community) and the various LinkedIn groups that I’ve joined. Having a common topic of interest where we can discuss, debate, and learn from each other, is crucial to the development of our relationship. The combination of frequent engagement, deep interaction, and time spent together is what builds strong relationships within communities. As a result, some of these community acquaintances have become my friends.

Therefore, successful social networks must have some form of community for their members to interact and build their relationships. Without communities, social networks are merely glorified phonebooks and contact lists. It didn’t take long for SNS providers to figure this out. As a result, we can expect to see an increase effort for SNS companies to build out their community solutions. In fact, FB groups, fan pages, and LinkedIn groups were early attempts to build communities within the social network. They are indeed communities according to the characteristic differences that were layout in Community vs. Social Network.

These groups and fan pages provide community-like interactions, such as sharing news and discussions on the SNS platform. However, these community building interactions are very limited, and they are often inefficient for cultivating strong relationship. The recent launch of FB community page provides further evidence in support of this theory.

In my next post, I will cover Stage 3, the maintenance of strong ties. Until then, I welcome any discussion.